Cryonite is an effective treatment for bedbugs, but it can eliminate other crawling insects too. Cryonite will eliminate bedbugs at all stages of life, including adult bedbugs and eggs. It is becoming popular around the world and is commonly used in the United States, Europe, and Australia. Cryonite releases CO2 as snow so it can penetrate all cracks and crevices.

How Does Cryonite Work?

Cryonite eliminates bedbugs on contact. It does so by freezing the bugs and exposing them to low temperatures. Carbon dioxide snow is sprayed from a specially designed, patented nozzle.

Dry – Frozen carbon dioxide or “dry ice” sublimates and transforms from snow into gas. There is no liquid phase, so this technique can be used without creating a mess. Furthermore, Cryonite can penetrate all cracks, crevices, and even electric outlets.

Ergonomic – The exterminator uses an ergonomically designed unit and a telescoping nozzle.

Cryonite is a non-poisonous method to get rid of bedbugs.

Are you ready to begin? Pick up the phone and contact our local office to learn more about our cryonite treatment options. We serve Indianapolis and surrounding cities. 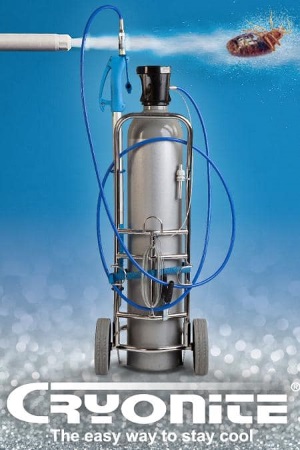